I've been following posts from different groups on Linked In recently and in one a massage therapist asked how other therapists got their clients to be quiet during the session.  The discussion was pretty lively between those who strongly believed clients should be silent and those who felt that talking during the session is part of the healing.  I fall in the latter group.  I don't initiate a conversation during a massage but if my client asks something and it develops into a discussion then I am comfortable letting it continue.  I feel that great healing can happen from articulating an issue.  Actually, it doesn't have to be an issue that is spoken about.  Here's the perfect example ...

Last week one of my regulars came in for a remedial massage.  She had booked an appointment ages before and on the original day she had sick kids and had to postpone to the following week.  The following week she had caught what they had and so she rescheduled for three weeks later as the kids were on school holidays in-between.  So five weeks after she had originally planned it she got her massage.  She's a chatterer, we discuss kids, food, playground mum politics ... all sorts of stuff.  Last week we settled into the massage and she asked what I thought about Reiki.  I initially did my Reiki over 21 years ago - it has always been part of my family's life and for me on a personal level it was the biggest hit of energy and growth I've ever had.  I shared this with her and said I think most people would benefit from learning Reiki themselves and I gave her the name of a few places that offered attunements.

The talk moved to health generally and the fact that she was considering starting a nutrition course.  I just had to jump in and talk about my Thermomix.  (If my kids ever read my blog they'd be rolling their eyes right about now, "good grief, here she goes again with the Thermomix".)  She got really excited, she'd been to a demo and wanted one but was struggling with the price so I mentioned that they sometimes offer interest free loans and I'd let her know the next time one came up.  Then we moved on to the next topic.

She mentioned that her son had started chewing his nails.  I had the perfect solution - kinesiology with my friend Angela, who does a lot of work with kids.  Repetitive behaviours respond well to kinesiology and I felt sure they would find some joy.

That night when I got home there was an email from Thermomix saying they were offering the interest free option from now till early next year so I left her a message and she called back all excited, because she had called the demonstrator and asked her and had got the news.  And in the meanwhile, she had booked in for a Reiki course on the weekend and booked her son in to see Angela.  All in the space of 24 hours!

This morning she walked into the clinic carrying a bunch of irises - she had come to say thank you.  She's ordered her Thermomix, it'll be delivered sometime this week.  She's done her Reiki and has already used it on her kids and they've felt it (even if she can't feel what she's doing and wonders if anything is really happening).  And she noticed that her son wasn't chewing his nails this morning, nor could he remember doing it for a while. 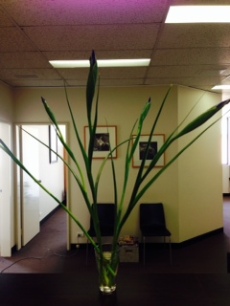 I don't feel like I've done anything special enough to deserve flowers, but she felt that through our conversation she had already made so many positive shifts in her life and she wanted to express her gratitude.

And I'm learning to accept it.