The power of determination

I want to introduce you to M.  He's not my typical client, not that I really have those but you know what I mean.  Until May 2009 he was your typical (there's that word again), active male, working hard and enjoying being outdoors and active.

He was up a ladder clearing out some guttering and fell, landing on concrete, resulting in two months in a coma at Royal North Shore Hospital and then a few more months in recuperation at Ryde Hospital, until December.  Since then he's been getting himself back - he's had to learn to walk again and attends an exercise program called Walk On, three times a week.  He still walks with crutches but the Walk On guys have him walking short distances unaided - they work him HARD and he comes in with very sore muscles every week.  He sees physios and swims and is doing whatever possible to help himself.

M came to see me at the end of October last year because he had some swelling and pain in his lower leg for three weeks and after a clear Doppler his GP suggested some lymphatic drainage might help and sent him to see me.  That in itself is a minor miracle, a GP sending me a client, but I have to commend this particular GP, she's sent me two clients recently - progress.

I did the usual upper body MLD clearing and focused on his left leg.  M was very sensitive to touch and had (and still has to a lesser degree) jerking responses, even when clearing his thigh his lower limb would be twitching, or sometimes his right leg.  I have to say that I did drop my lecturer a note about that and she assured me that this happens sometimes, it's the increase in lymphatic flow making everything work a bit better and that includes nerves firing.  At the end of that first treatment he was amazed at the reduction in swelling.

He's been coming regularly and we've added some laser to the treatment as the area around his lateral ankle is a bit firm and that has helped break down some of the fibrosis.  What we've been doing of late is adding ten minutes of remedial massage to his quads because he is worked so hard at Walk On that his muscles are sore.  Our treatments change according to what he needs on the day but it's great to have a toolbox from which to choose.

Over the time we've had many discussions and I'm amazed by some of the things M still does, in spite of his limitations.  He related the story of being helped into the ocean while on holiday and a guy swimming out to him to tell him he shouldn't swim because of the sharks - his response "I'm going to swim from one beach to the other and he should get out if he was worried about sharks".  Well, the guy got out and M did his swim.

Or skiing again, using a special ski chair and going down so fast and doing such a sharp turn he broke one of the skis and had to get it repaired.  He's given me some photos of him skiing with his instructor - pretty amazing huh. 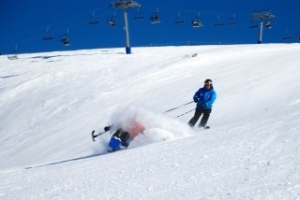 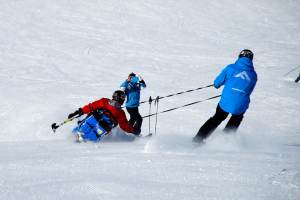 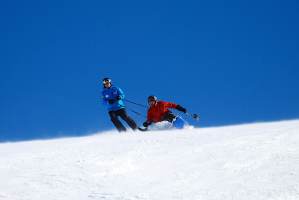 The moral of the story is, don't be limited by what you think your body can and can't do, anything's possible.